So I got this little GPS unit... not much bigger than my cell phone.

It only has about four hours of battery life.  So I needed to wire up the motorcycle so supply power.  So here's what I did under my seat

Well, the question was, what's the best way to set up the GPS on the motorcycle.  I do have a suction cup mount, and I also have a two sided tape for the mount, so I could attach it to the bike somewhere.  But after thinking about it, it seemed the best place was my tank bag.  If I wanted to see it I can put it in the clear pocket of my tank bag, and if not, then I can just put it in the tank bag. 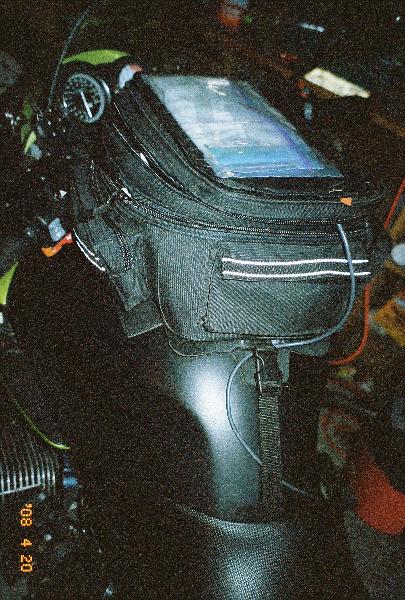 Course it's not going to do me much good in there without a set of headphones.

I went in search of headphones (or earbuds as they are called).  Lot of stuff out there.  Few dollar cheepos all the way to noise canceling ones that sell for hundreds of dollars.  OK.  We'll stick with the cheapos.  Well not totally cheap.  I read around and found that on the lower end of the scale the JVC "Marshmallow's" got good ratings. This is what the business end looks like:

But I didn't like the way those fit, and it seemed to me they didn't really block out much noise.  Nope.  I needed something that was much cushier and did a much better job of blocking noise..  So, I took off the replaceable tips:

And tried to figure out how I was going to insert them into a set of standard squish foam ear plugs:

I tried all sorts of way to drill some holes in them, but nothing worked (to soft), then I had a brain storm.  I cut the foam down to size, then I found a nail, heated it up on the stove (holding it with a pair of vice grips) and when it was hot enough, stuck it in the center.  And what do we have but perfect holes for the buds.  The hot nail just melts the foam.

Use jut a drop of water for lubrication, slip those babies on the buds, and we're done:

I rode with them like that on one long trip and found that too much wind noise was getting in through the buds.  So, I thought about it some more and this time I did not cut the tips off.  I just trimmed off a bit of the back end (maybe 1/8") and used a hot nail again, but this time I didn't go all the way through.

It was surprising how much of a difference that makes.  At the same volume as before I could hardly hear the GPS, but turn up the volume all the way, and I get the best of both worlds; clear GPS voice commands and good wind/noise elimination. Problem permanently solved.