Yeah, you know what the cowboys say, when you fall off a horse you have to get right back on.  So figuratively that’s what I did.

After my season ending crash last year at Gingerman, I pretty much spent the whole winter monkeying around with my bike.  I bought new rotors and brake pads for it because mine had apparently warped after Mid-Ohio. Depending on how hard I was braking, the front forks would vibrate slightly, like I was going over a really rough surface. I took apart the forks to see if there was anything wrong with them and found nothing.  So, I took the opportunity to raise my fluid level to prevent bottoming the forks out when braking hard.

Also, I wanted to replace the piecemeal bodywork I had (various colors) and buy one of those Auctmarts (China made) Moviestar fairing sets.  It sure looked good in the add, and one of the guys on 1000rr.net got a set and they looked good on the bike too.  So, I went and sold off all the fairing pieces I could, which basically left the two fenders and the right lower.  I then took that money, bought an Auctmarts fairing set, and the rest was history.. or should I say misery.  The stuff had defects all over it and it fit like crap, and the more I tried to do with it the more problems I found.  Enough was enough and I managed to get most of my money back, but ended up loosing a couple hundred dollars on the deal.  I then decided to go with a reputable company and bought a fairing from Sharkskinz.  Well, that also went nowhere because the headlight assembly wouldn’t fit in the fairing properly.  I’m still working on getting my money back on that deal.  So, I went and bought tank and tail plastics off Ebay, slapped on my old scratched/cracked nose piece, welded some of the bad cracks together, and that’s how the bike is today.  Looks like crap but it still goes.

So, here I was on Friday the 20th, all bummed out about my crappie bodywork and the hassle I’d gone through, money I’d lost, etc.., and the weatherman was predicting high seventies and sunny for the weekend.  Time to go on a trackday.  Last year I started my season at Grattan in Belding MI.  And it just so happened this particular weekend NESBA was once again at Grattan, and Sunday they were running the track Counterclockwise, which of course means it’s a completely different track.  That combined with the weather, and I just couldn’t pass it up.

I went on the NESBA site, and sure enough they still had openings at the track.  It would cost me a bit more because I was signing up late, but I had credit with them from last year, and even with the extra cost it was less than some of the other tracks.  I signed up.  Then I went online to find a hotel.  No more staying at the Candlestone like last year… that bed was torture.  So I found a Red Roof Inn about 20 minutes from the track, the price was right, I made a reservation, and the stage was set.

Saturday I did the usual preparation of the bike.  Course it was faster this time around because half the bodywork was missing. I got out my supply list and started getting all the stuff together.  Along with some of the other stuff I had to get done that day… like do some food shopping and mow the lawn for the first time this year… My wife actually got home from work earlier than she’d planned and when 4:00 rolled around I was ready to go.  I had planned to leave at five, but decided to take off early so I wouldn’t be getting to the hotel in the dark.  As it went, with the one hour time difference, I made it to the hotel at dusk.

The Red Ruff in should have been named the Red Rough Inn… Wasn’t great, but for the price and location it wasn’t bad, and the bed was better than at the Candlestone.  At least the mattress didn’t have a permanent deformation where thousands of peoples back sides had resided on it.

Honestly I can’t remember what I had for dinner that day… I think I just ate a late lunch and brought enough fruit and stuff that I could have when I got to the Inn.  But as I was sitting in my room, I realized that in my cooler I had a gallon of milk… and in one of my bags I had a whole package of Oreo’s.  I hadn’t planned it that way, but was I glad it turned out that way.  So, after I had some more healthy food, I broke open the Oreos and milk… mmmmm…m.  You never outgrow Oreos and Milk.

Well, I watched some TV and got myself to bed at 9:00 Michigan time so I could wake up early and make it to the track by around 7:00 am.  I actually slept pretty good, compared to how I usually sleep in hotels and before a track day, and woke up just before my alarm clock rang.

I had directions to the track from the Hotel, but they were not very clear.  I ended up on what was the right road, but instead of saying XX East, it said XX South.  So, when I stopped for gas and to buy some more ice for the cooler I got the directions clarified.  Yeah, I was heading in the right direction, but even the guy at the station couldn’t explain to me why the signs weren’t right.

I got to the track about 7:15, and lets just say there was a lot more people there this year than last year.  Last year we had about a dozen of us.  This year there was a full three groups.  People were parked everywhere.  I got a parking space in the center of the paddock area and got myself unloaded.  Things were moving to, inspection was already under way, so when I got my bike off the trailer I bought it right over.  During inspection a couple of the guys I knew were asking about the bike and the bodywork.  I gave them the whole sad story about the Moviestar fairings, and one of them knew what I was talking about.. he’d installed some of those for someone and it had not gone well, so he knew what I was talking about.

Before the rotations started I walked around a bit and talked to a few people.  There was this young kid there, Saturday had been his first track day.  I stated talking to him because he had a Buell and you don’t see too many of those, but it seemed like the perfect bike for this track; short wheelbase, easy to throw around in the right-left-right-left transition at the back of the track.  He had run off the track in the “swamp” area on Saturday and the bike had gotten stuck in the muck, requiring several guys to helped him get it out.  He hosed it off and it was none worse for wear.  Back at it Sunday.

Overall it turned out to be a great day, and running the track backwards was very different.  First there was the jump, which when taken clockwise you could get some air over, but not too much because there was a curve relatively close on the other side and you had to brake before getting to it.  But going counterclockwise you could accelerate over it full steam.  People were regularly getting their front wheels off the ground over it.   Here’s one shot of me coming over it getting the front end up a bit, and that’s without trying. 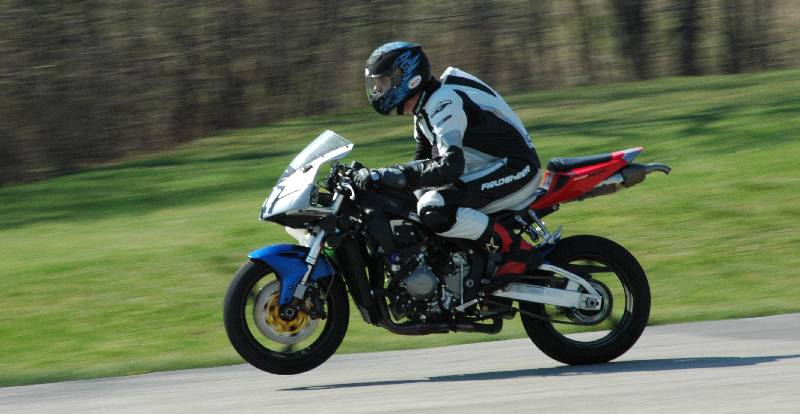 One time I came over that thing and I’m pretty sure that both of my wheels were off the ground and my nose was way up, because when I landed I felt it.  I had found the limit of how fast you can go over that thing I guess.

One of the other fun parts was Turn 3 which would be a steep downhill, but now was an uphill with a blind exit.  The tricky part is that as you’re coming to the corner you’re going downhill, so you can’t brake as hard, then as you go through the corner and end up on the top of the hill you really need to be close to the inside of the turn, cause as you come over the hill you drift out on the track.

This looks like a shot toward the bottom of the corner going up. 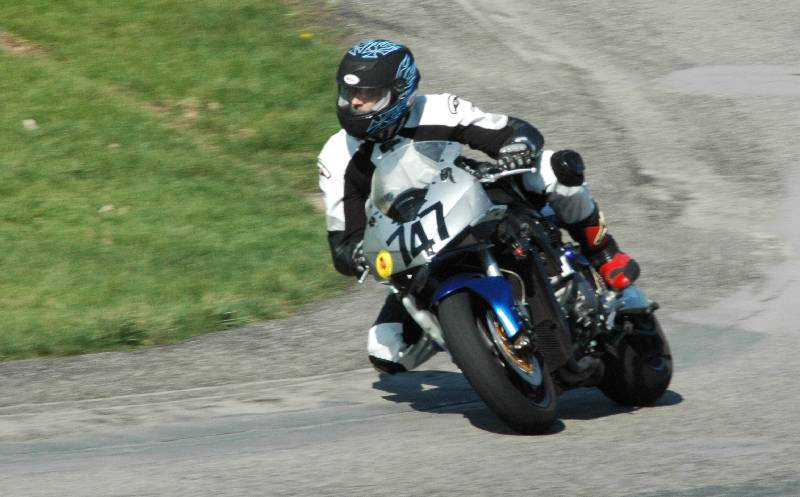 Then there was turn one which was normally the end of the straight, so now it was the start.  Going clockwise you could cook through there because it was slightly uphill, but going the other way it was downhill, so you can’t get as much traction because the track is falling away from you, but it’s still a fast curve.  This is a shot through there, and from what I can make out, it looks like the entrance to the corner. 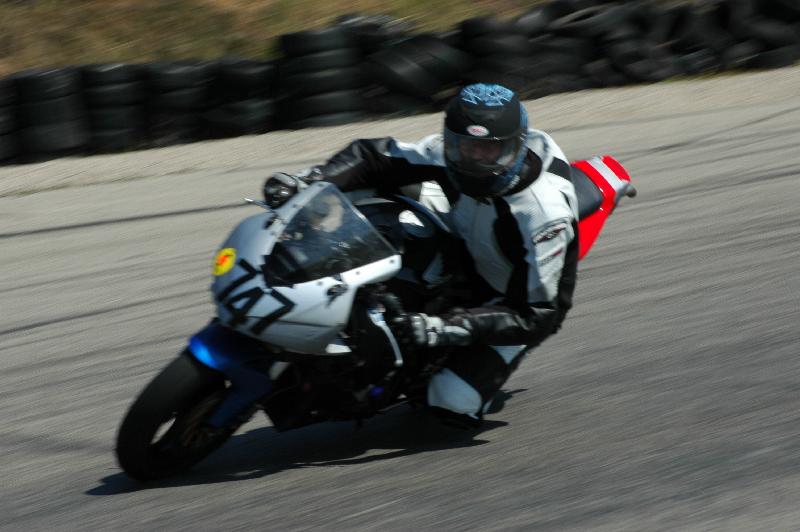 Actually, that’s a pretty cool shot, and it’s a little blurry anyway, so I did some graphics work on that and made it look like an oil painting.  It would make a nice print.  I like the different colors, textures, and shadows. 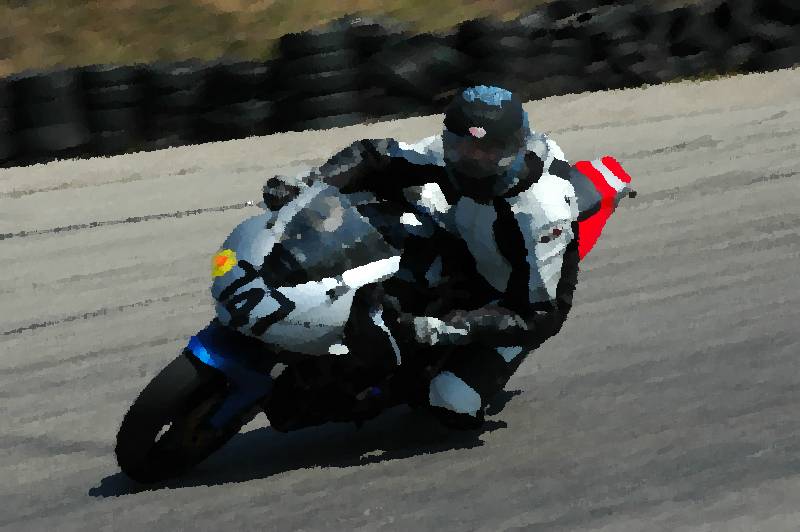 My only incident was while I was following one of the control riders around. He was cooking through that turn.  I couldn’t hold his line and ran into the grass on the outside (shades of last year, huh?).  I got right back on the track but made sure that I took the next turn a little slower to make sure my tires weren’t wet and grassy and all that stuff that causes nasty crashes.  At one point I almost caught back up to him, but he was too fast for me.

And at the end of the straight, what would have been turn 12 is now turn 1 and that is also fast and can be taken at about 100 mph.

I did notice during the day, and actually before while riding on the street that my front end still vibrated a little during braking.  I figure that’s just pad and rotor break-in.  It better be.  We’ll see after a few more hundred miles.  Other than that the bike was great.  At one point I bled some fluid out of each fork legs cause it looked like I wasn’t using my full fork travel.  How did I know… well that’s what cable ties are for.  You tie one around your fork leg slider and as the suspension moves you can tell what the furthest movement is.  If it’s too far you add fluid, and if it’s not far enough you bleed some off.  Fluid doesn’t compress, but air does, so less fluid and more air means the forks will compress further.  Suspension tuning 101.

Well, toward the end of the day it was getting hot, and I was getting tired, and I wanted to get home relatively early, so I skipped the last session and took the time to pack everything up.  It was a good day.  Yup, I missed it.